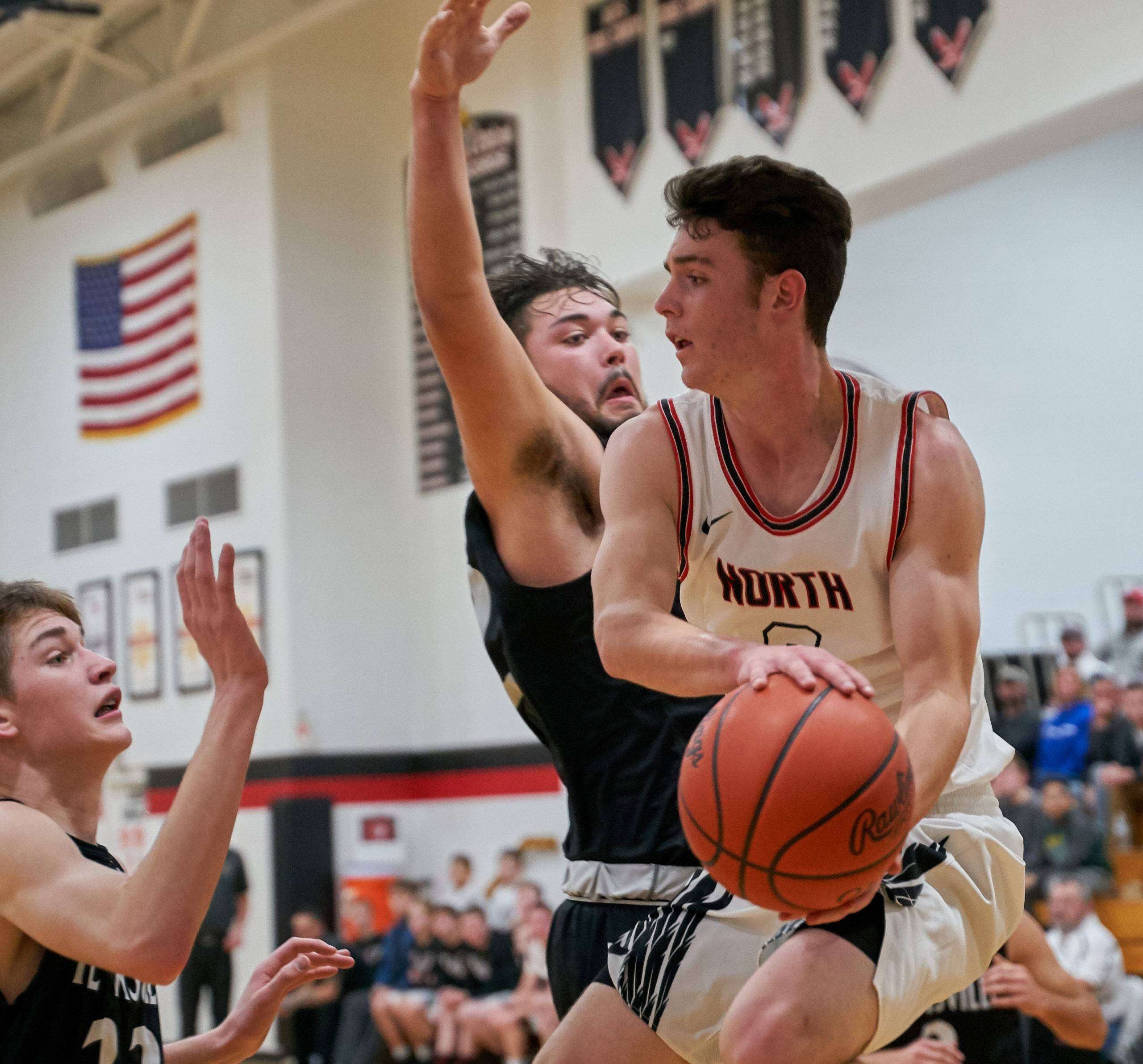 “It means a lot to me. It is something I’ve dreamed about accomplishing since I was in the 3rd grade. I always looked at that board in the gym and I knew that I wanted to have my name up there someday”, said Bailey.

“It has taken a lot of work to get there, but it has been worth it. The fact that I was able to accomplish that goal on my senior night, the last time I would play on my home court just helped make it even more special”, added Bailey who is also a member of the North Central baseball and golf teams.

“I’ve had a basketball in my hands since I could walk. When I was in the 1st grade I would go into biddy ball with my older brothers. I’ve always played basketball and it was usually with older kids.”

“I had to learn how to handle the ball and maneuver in order to score against my brothers and their friends. I played with a team from Bryan during the summer before my 8th grade year. We played at the MAC Gym in Antwerp. We went undefeated that summer.”

“I learned a lot that summer from my coach, Maurice Zuver. I had great teammates that helped push me to be an even better player. I’ve always been in the gym or in the driveway working on my game”, added Bailey.

Jack has many fond memories of his high school career, that came to an end last week in a heartbreaking 43-41 loss at the buzzer to Ayersville in the Sectional Finals.

“I’ve had three big game winning shots in my career against Edon, Montpelier, and Stryker. It was an awesome feeling! Obviously, my most memorable moment was scoring my 1,000th career point.”

“The gym was packed that night and the crowd went wild, there was confetti and cheers that were deafening. It was senior night and we won the game. I closed my home career with 20 points on the board that night. It was a great night to be an Eagle.”

Jack had some words of advice for the younger players out there who have dreams of reaching 1,000 points. “Keep that dream alive and make it a goal. It is achievable, but you have to work for it.”

“Never make excuses. You are going to have to work hard all the time, even in the offseason. Great players are always working to get better. Good enough is never good enough”, he added.

After graduation Jack looks to get started on his dream of owning his own business. “I’m still a little unsure about my plans after high school. I would love to continue playing basketball, but college isn’t where my sights are set.”

“I want to own my own business. My family currently owns JB3 Custom Apparel where I work and design many of the items that leave our shop. I enjoy this, but I’ve always had a love for heavy equipment and building things.”

As a kid I remember when they were preparing the ground to build Menards. We drove by there every day. I loved watching the enormous equipment move dirt.”

“I would love to be a heavy equipment operator and possibly own my own construction company”, said Bailey who has also been active in FFA, OARS, In-Flight, Musical, Student Council, was the Junior class Vice-President and has earned spots on Honor Roll during high school days.

In closing, Jack again emphasized what the game of basketball has meant to him. “I would like to thank my basketball coaches that have always pushed me to do better, be better, and believed in me. I’ve also been blessed to have great teammates that were also my best buddies.”

“We have spent a lot of time on and off the court together which helps to make our bond pretty special. Anyone that has ever known me knows that Jack Bailey and basketball go hand-in-hand. It’s just who I am.”

“I will miss being in a uniform next year, but I know that I have left my mark for years to come. My name will always be up on that 1000-point board in the gym and that will only be part of the legacy I leave behind.”

“I hope that my team and I are talked about for generations to come because we have something very special……a bond, a friendship, and a love for the game.”

“Thank you to everyone who has supported me, cheered me on, and always believed in me and my team. It is something that I can take with me and will always cherish the memories of being a basketball player for North Central. I’ll always be an Eagle!