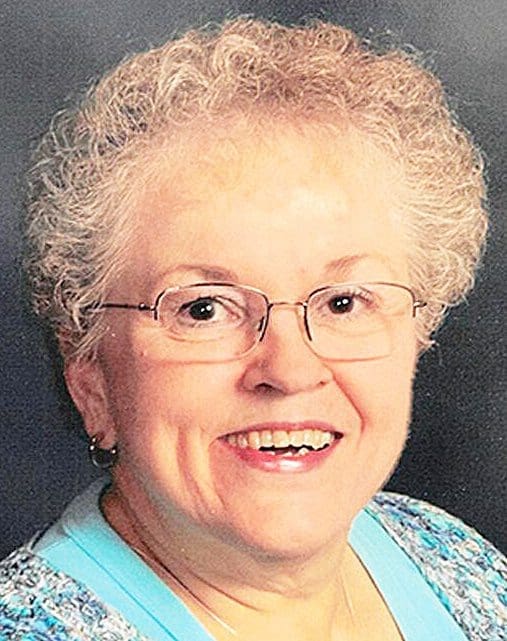 After several surgeries on her leg by age 3, she moved with her family to their farm in rural Montpelier, Ohio; and Jan graduated from Montpelier High School in 1957.

She met Bob Salsbury at the Bryan Roller Skating Rink, and they married Nov. 15, 1958.

When their three children were young, Jan helped Bob with the accounts at Salsbury Sinclair Service Station before eventually taking a position as billing supervisor at the Northwestern Electric Cooperative, from which she retired in 2004.

Jan and Bob enjoyed camping on summer weekends and eventually took up Western square dancing – Jan was very proud and grateful that, despite her bout with polio, she was able to walk without a brace until the age of 50!

Jan accepted the Good News of Jesus Christ at First Baptist Church in Bryan in 1972, was a founding member of Bryan Community Bible Church and eventually became active at New Hope Community Church in Bryan.

After retirement and spending summers assisting son Kevin in his work at Camp Barakel, Jan and Bob moved to Rose City, Michigan, and spent winters in Mesa, Arizona, where Jan enjoyed riding her three-wheeled bike, swimming in the pool, and attending potlucks with friends.

In 2017, they moved to Fairview to be closer to Kevin’s family and their church family at Comins Community Church; and in late 2019, post-polio syndrome caused Jan to take a room at Wellspring.

Jan’s greatest joys were her children, grandchildren and great-grandchildren; and she especially enjoyed cooking for them.

She was preceded in death by her parents and parents-in-law; her brother, Gerald “Squeak” McCool; and her sister-in-law Diana McCool.

Visitation with the family will be 6–8 p.m. on Sunday, Jan. 8, and 11 a.m. to 1 p.m. on Monday, Jan. 9, at Comins Community Church. A funeral service will follow at 1pm, at the church, Pastor Kevin Salsbury officiating. Interment will follow at Fairview Cemetery. A memorial service will be held at New Hope Community Church in Bryan, Ohio, on Wednesday, Jan. 11; visitation will begin at 9 a.m. with the service at 11 a.m. and a luncheon to follow.

In lieu of flowers, memorial contributions may be made to Comins Community Church.