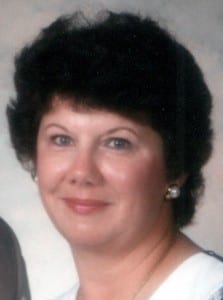 Janice Lee Echler 70, of Montpelier died Friday afternoon at Evergreen Manor Nursing Home in Montpelier after a long battle with cancer.  She was born On January 9, 1943 in Ft. Wayne Indiana to Edward and Helen (Blee) Eagleson.  Janice graduated from Central Catholic High School, and then went on to St. Francis College both in Ft. Wayne.  On June 30, 1962 she married Van D. Echler in Ft. Wayne, and he survives.

Janice was an elementary teacher’s aide for Montpelier Schools for 27 years, retiring in 2006.  She also sold real estate for Bob Mercer Reality.  For many years she attended Sacred Heart Catholic Church, and was a member of the Pioneer Garden Club.

She was preceded in death by her parents.