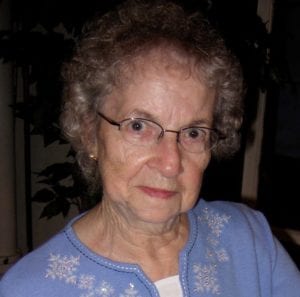 Josephine E. Slattman, 92 years, of West Unity, and formerly of Fayette, passed away Thursday, July 28, 2016 at Community Health Professionals Inpatient Hospice, Defiance, with her family at her side. Josephine was born October 15, 1923 in Continental, Ohio, the daughter of the late Virgil and Edna (James) Bush. She was a 1940 graduate of Continental High School.  She married John A. Slattman in January 1943, and he preceded her in death on March 16, 2001.

A devoted dairy farmer’s wife, Josephine also worked as a furnace operator for the former Fayette Tubular for over 20 years, retiring in 1986. She was raised in the United Brethren faith, but after moving to West Unity, she attended Archbold Evangelical Church.  Josephine loved to garden and spend time watching the birds in her yard.  She was also known as a great cook, who made wonderful pies and potato salad.  What really made her smile was having the family around and spending quality time together.

The family has requested that those planning an expression of sympathy to consider memorial contributions be given to Community Health Professionals Inpatient Hospice, 6825 State Route 66 North, Defiance, Ohio 43512.