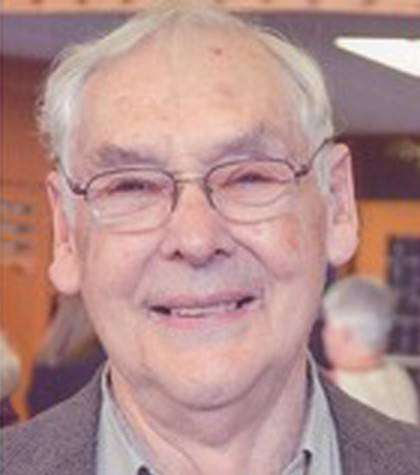 Lee W. Miller, age 89, of Bryan, Ohio, passed away peacefully on Sunday, December 1, 2019, at Community Health Professionals Inpatient Hospice near Defiance, Ohio, with his wife of sixty-five years at his side.

Mr. Miller was a 1948 graduate of Edgerton High School and served in the United States Marine Corps  from 1952-1954, stationed in Korea serving as a machine gunner on the 38th parallel keeping the enemy from crossing into South Korea.

Upon leaving the Marines he attended The Ohio State University for two years , studying agriculture. Lee was baptized into the Methodist faith at Emanuel United Methodist Church near Edgerton and would later become a member of the Melbern United Methodist Church, where he was active on the Administrative Council, as a trustee, as camp coordinator, as general repairman for the church, and as chairman of the pastor-parish committee.

Upon moving to Bryan, he transferred membership to Wesley United Methodist Church, where he was active as a trustee, making furniture for the Dresser Ministry, with the United Methodist Men, and singing in the choir.

Throughout his life, Lee was a master carpenter, builder and farmer. His family has fond memories of growing up on the farm and visiting with the grandchildren in later years.

In retirement, this master craftsman could be found in his wood shop making things for charity and to give away as keepsakes. He was a loving husband, father, and grandfather and enjoyed his time with family.

Lee W. Miller was born on January 8, 1930, near Edgerton, the son of C. Russell and Helen G. (Blaker) Miller. He married Carol M. Newcomer on September 12, 1954, in the Melbern United Methodist Church and she survives.

Surviving in addition to his wife are one daughter, Deanna (Dan) Fitzpatrick, of Syracuse, New York, and their children, Kyle, Ryan and Colleen; one son, Greg (Jennie Lovett) Miller, of Toledo, Ohio; grandchildren, Joshua (Courtney) Miller and great-granddaughter, Savannah, and a great-grandson, Walker Miller, both of Morristown, Tennessee, and Emma Miller (Patrick) Gilmartin, of Knoxville, Tennessee; one brother, Duane (Ida) Miller, of Rochester, New York; one sister, Barbara (Chris) Duffy, of Mt. Laurel, New Jersey; and numerous nephews and nieces.

He was preceded in death by his parents;  two sons, Eric Keith Miller, at age four, and Kevin Lee Miller, at age fifty-eight; one sister, Jean (Miller) Cox; and one brother, Robert Miller.

Visitation will be held in the Krill Funeral Home, 860 West Mulberry Street, Bryan, on Friday, December 6, 2019, from 4:00-8:00 P.M.  Services will be held on Saturday, December 7, 2019, at 11:00 A.M. in the Wesley United Methodist Church, Bryan, with Reverend Peter Paige officiating. Interment will be in Maple Grove Cemetery in Edgerton with grave side military rites conducted by the United States Marine Corps Honor Guard.