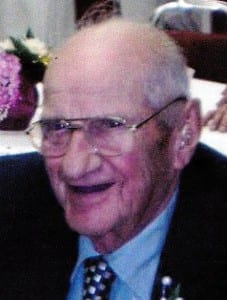 Merve retired in May of 1984 from Miller Brothers Paving of Archbold as a general laborer.

He was preceded in death by his parents, one sister Lucille Zimmerman, one grandson Brian Gendron and one great granddaughter Maggie Yahraus.

Visitation hours for Merve were on Sunday September 30th from 2-7pm at the Thompson Funeral Home in Pioneer.   A graveside service was held on Monday at 11am at Floral Grove Cemetery in Pioneer, Ohio with Reverend Michael Raypholtz officiating.  Military rites were conducted by the Pioneer Veterans.  In lieu of flowers donations may be made to Williams County Veterans Memorial Building.  Online condolences can be made at www.thethompsonfuneralhome.com