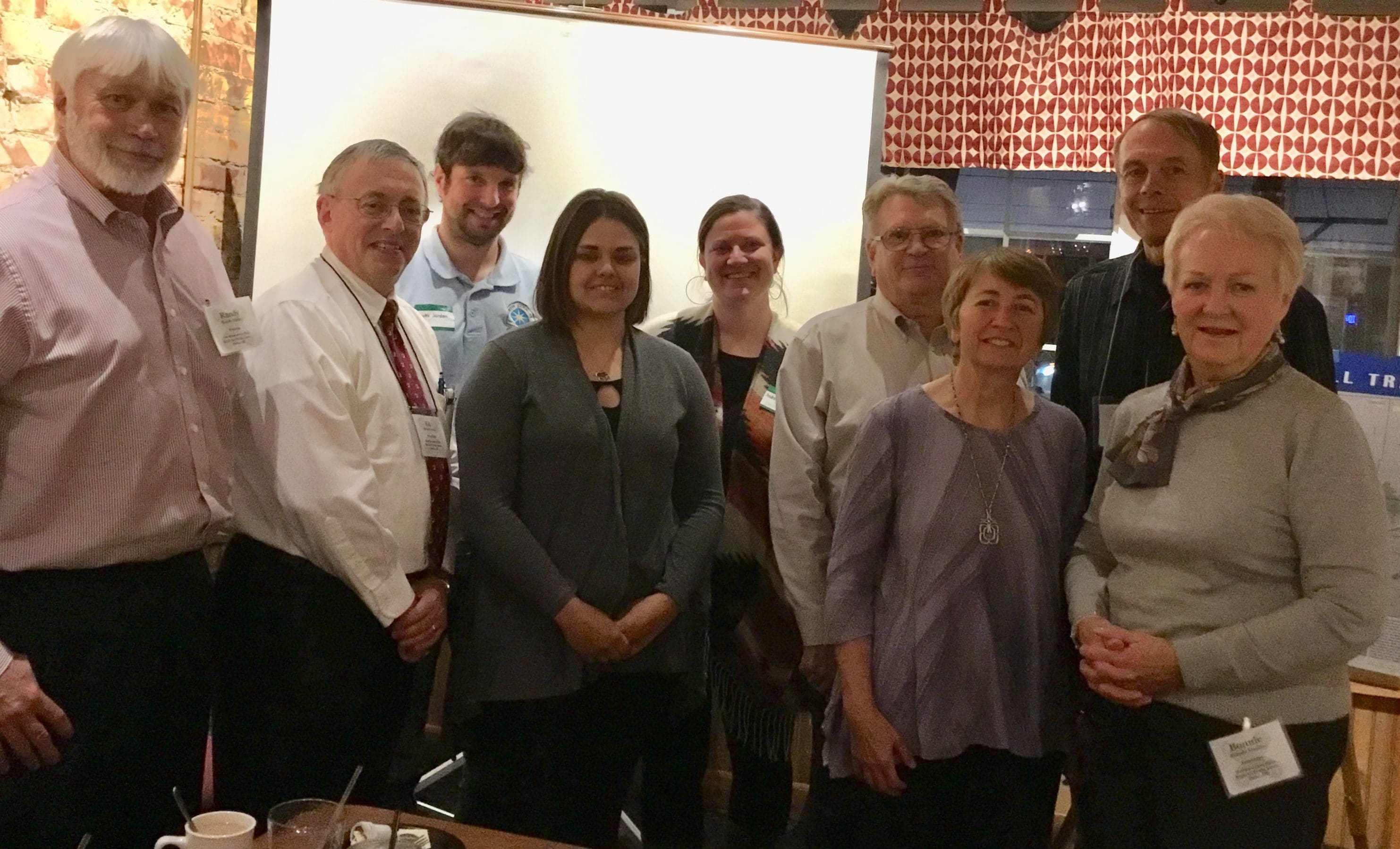 Tremendous efforts treat counties to trails! On their official flyer for the Wabash Cannonball Trail, it states that “NORTA (Northwest Ohio Rails-to Trails) is a 501 c3, not for profit, organization, staffed solely by volunteers. As the owner of the trail in Henry and Williams Counties and a major portion of the trail in Fulton County, NORTA is responsible for 32 miles of the Wabash Cannonball Trail.”

Board officers are President Ed Snyder of Swanton, Vice President Tom Striggow of Bowling Green, Secretary Bonnie Markley of Delta, and Treasurer Patti Gehring of Perrysburg Township. Board members include Randy Miller of West Unity, (Bob Apger of Archbold recently resigned), and three new members added at the meeting: Tom Hall of Wauseon, Jim Shaw who works with Toledo Metroparks and Hope Russell of Bryan. As you can see, the board members hale from eight different areas, making it a well balanced group.

Board members and Volunteers met on Thursday, October 17, 2019 at the Delta 109 Tavern and Restaurant for the 28th Annual Meeting, but 25th Anniversary of the ownership of the trail. Following their Buffet dinner, all were treated to a slice of anniversary cake. The meeting was rather long as it was not just an annual meeting.

Those present were given a “reader’s digest version” of the history of the Wabash Cannonball Trail by President Snyder and then had the treat of hearing Keynote Speaker Andrea Ketchmark, Executive Director of North Country Trail, a 4600 mile connection of trails of which the WC Trail has now become a part.

The history was broken down into increments, compiled by Patti Gehring and shared in part at the meeting by Ed Snyder. He opened with these remarks, which he said were spoken five years ago at the 20 year anniversary, “American cultural anthropologist Margaret Mead once said, ‘Never doubt that a small group of thoughtful, committees citizens can change the world; indeed it’s the only thing that ever has.’

Twenty-five years ago, a small group of committed citizens acquired a 48 mile stretch of railroad right of way in Fulton, Williams and Henry counties. They called themselves the Northwestern Ohio Rails to Trails Association, Inc, aka NORTA. Their intent was to preserve the abandoned corridor and establish a recreational trail for public enjoyment. We are here tonight to celebrate the anniversary of that renowned day.”

Over the years, the group has lost some very special people who worked hard to make the Rails to Trails successful. They were named and honored by those present; being Merle Snyder, Walt Kruse, Walt Studebaker, James Keller, Jack and Dortha Stoner, Tom Duvendack, Irene Kruse and Gene Markley.

Snyder said, “They are gone from the rolls but not from the Trail or our hearts. Losses over the years have been sad and have affected the group as they all worked on the trail in many ways. They were so faithful in support and work and in coming to the annual meetings. They all asked what they could do for the trail. They were innovators and did what needed to be done.”

Snyder added that he personally feels like the people who pour their time, energy and love into the trails are living what President Kennedy said years ago, “Ask not what your country can do for you. Ask what you can do for your country.” Only for them he substituted Trail for country and said that there are many who are truly doing that. He called for a toast “to friends of the Wabash Cannonball Trail!”

In a short business meeting, the minutes from the last annual meeting were accepted, and reports were given by Tom Streegow, Mark Beeman of Toledo Area Bicyclists, Randy Miller from Williams County section of the trail, and Joe Mantey, of Huron County Firelands Rails to Trails Inc.. (Members may see their reports in the minutes of the meeting.)

One highlight from each one: Streegow shared that the Savannah is providing some great income; Beeman told the group how telling riders that the money being raised is going to NORTA has shot their amount much higher than ever before; Miller was excited to report that the Williams County end of the trail is doing great and is especially happy about the changes being made for the equestrian users; Mantey brought his little girl, Jackie, up front with her coyote puppet and they unveiled a loving tribute to Gene Markley for all that he did for the trails and for them as friends.

A presentation of a Lifetime Membership was given to Mark Beeman From Toledo area Bicyclists and he responded that it is their pleasure to support NORTA. A Quarter Century Award was given to Bonnie Markley and the Walt Award, or the Volunteer of the Year award, went to Pattie Gehring for her hard work this year with all the crazy finances. The 2019-20 Election of Board of Trustees was held, putting all those presently in the positions back up as a group, and voted for it to remain that way.

The Keynote Speaker for the evening, Andrea Ketchmark, welcomed NORTA as a new affiliate with North Country Trail, the longest continuous hiking trail in the U.S. She spoke of how this NCT is one of eleven national scenic trails, crossing eight states, which was designated in 1980 by Congress to highlight scenic, historic and cultural resources and northern communities, and was to be built and maintained by volunteers. This trail is under the National Park Service and there was a young man present, Luke Jordan, who has walked it all, who works for the NPS.

Ketchmark shared stories of how the trails affect the people who enjoy them, saying, “All of you know it is not just a trail. They can change the world and change people. They are a place to get the next generation to care about the environment and their own health and their family. We are building community. It builds a family through the organizations that make it and I can see that in this room tonight.”

“It is our goal to build this trail from ND to Vermont, which will be 5000 miles when done, through a trail-wide coalition of volunteers and partners.” She said that it is huge undertaking as it crosse jurisdictions and is taken care of by many groups including volunteer groups like NORTA, National Park Staff and the U.S. Forest Service Staff. Ketchmark added that when they are making presentations for support it is a wonderful thing to be able to show that it is done by volunteers. “They love that and jump on board with us.”

In business, she announced that Chris Loudenslager has been named as Superintendent for the Trail. Congress voted to pass a Route Adjustment and they are able to really get some new work done. One change they made in recent years is 100% free maps online that can be printed, or used with an app that doesn’t require cell service.

There have been 31,000 downloads since March 2018. They also have an interactive map where you can decide where you are going. They started the “Hike 100” challenge in 2016 to celebrate the park service anniversary but due to the great stories of people who have hiked 100 miles in a year, they have kept it going.

Next year is 40th birthday of North County Trail. They also have started the Next Generation Coalition Summit, to get younger people interested and they are determining what their part in the North Country Trail will be. Presently they are doing outreach as Peer to Peer is so important to them.

She also explained that they are not a land acquirement organization, but already have 3200 miles of trail on the ground and look forward to getting it to that 5000 mile goal. There are bridges that need to be built, and volunteers to get going. She let the group know that the North Country Trail is thrilled to have them as a part of the trail and that it is there to help in any way needed. She encouraged everyone to keep up the good work and again welcomed them as an affiliate in the North Country Trail.

At the end of the meeting, Marianne Duvendack, asked to speak and gave a funny award to John Fitzgibbons for painting the trail markers. It was the Painting Fool of the Year Award and everyone enjoyed a chuckle. Then seriously, with tears she made a motion that they designate three portions of the the trail, naming them the Ed Snyder Corridor, the Patti Gehring Corridor and the Bonnie Markley Corridor. The motion was seconded and a vote was taken to make it so. Tears and hugs were shared.

wabashcannonballtrail.org and northcountrytrail.org can be found online for much more information.