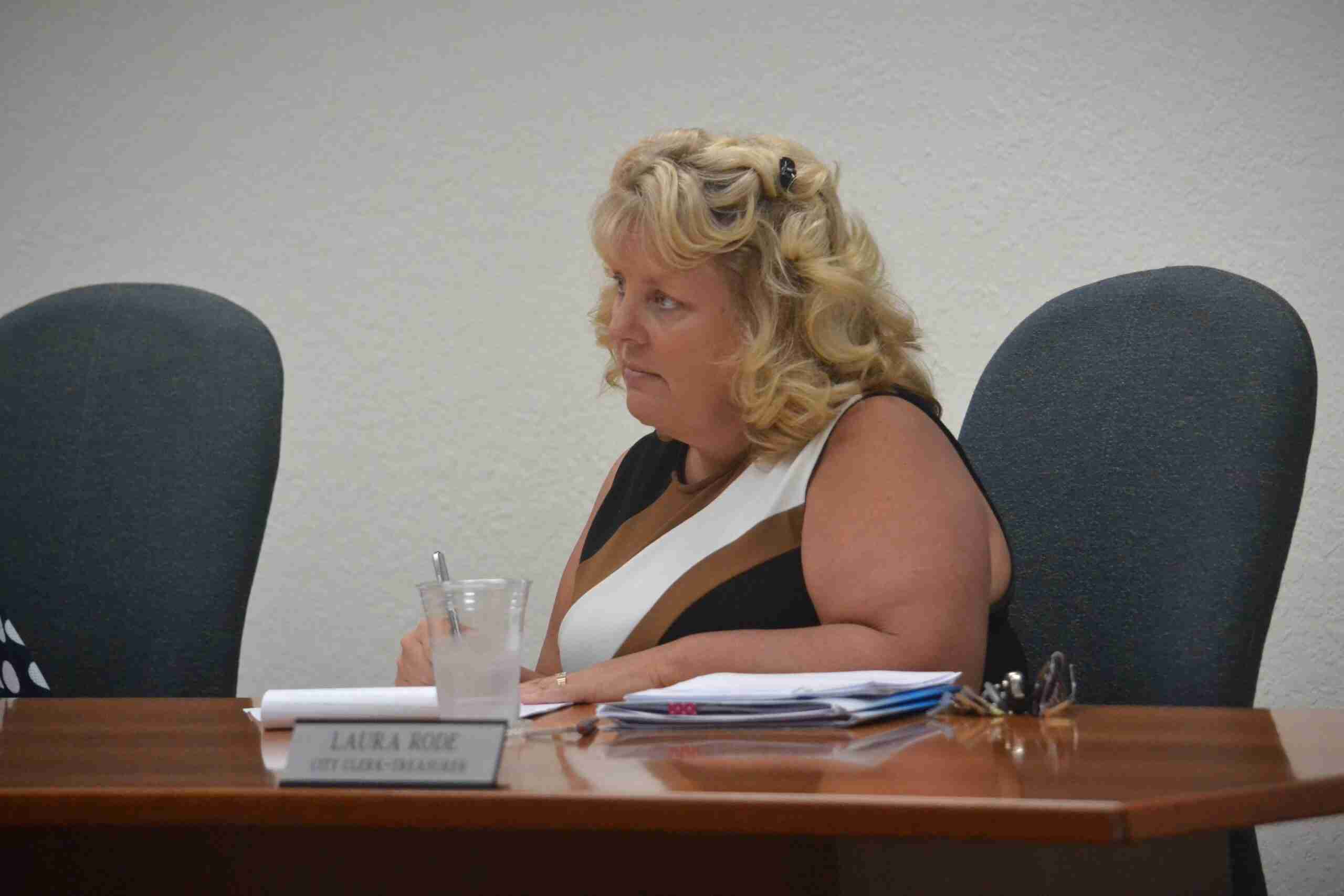 HEALTH INSURANCE NEGOTIATIONS … Clerk-treasurer Laura Rode explains how they were able to negotiate the new city health insurance premium from 19 percent, down to 10 percent. (PHOTO BY DAN COOLEY, STAFF)

By: Dan Cooley
The August 3 Bryan Board of Public Affairs meeting began with the pledge of allegiance. Next, the minutes of the July 20 meeting were approved unanimously.

That was followed by the first of the night’s two resolutions to be put forward, resolution number 2. In it, the Ohio Development partnered with the Environmental Protection Agency for provision for financial assistance for capital improvements to public infrastructure.

In turn, the City of Bryan wants to make capital improvements to drinking waterlines. This is considered to be a priority need for the community.

The Board of Public Affairs approved the measure unanimously, paving the way for Mayor Carrie Schlade, City Engineer Brian Wieland and Clerk-Treasurer Laura Rode, to enter into any agreements for obtaining the financial assistance.

That was followed by a streetlight petition for the Union Place entrance. Previously, the area had a streetlight, but it was heavily damaged in a car accident. First, the measure was approved by the property owners. The boulevard style streetlight is reported to be inexpensive and there is product in stock.

With the petition measure unanimously approved by the Board of Public Affairs, the installment of the streetlight will take place in the next two weeks.

“We negotiated down from 19 percent to 10 percent and I think this insurance will be of great benefit to the city,” Rode said. “There are no major changes in coverage and this insurance coverage was approved by city council at their last meeting.”

Insurance rates will be $74.64 monthly for single coverage and $204.18 for family coverage. Coverage begins September 1 and continues through August 31, 2022. Bryan BPA unanimously approved the resolution.

A presentation for a Water Treatment Plant Generator then took place. “This is a standby generator that the city currently does not have,” said Bryan Water Superintendent Derek Schultz.

“If power goes out, without a generator, water treatment stops. The current backup system we have in place has been there since the 1940’s.”

Power plant superintendent Jim Coressel explained the problem with the current backup system. ”It is deteriorating and the EPA has recommended that we replace it,” Coressel said. “This system cannot stand alone if we have a tornado that comes through.”

Nathan Gardner, director of public utilities, also talked about the need for a generator. “With a generator, the water plant is sustainable for the future,” Gardner said.

“This is not budgeted in the water department, but there is capital funds available to complete this. Hopefully, at our next board meeting, we can approve this.”

Next, the semi-monthly disbursements were unanimously approved.

In other comments, Gardner stated that there will soon be a field presentation on what the future holds for the solar field. The field has been in the area for about 10 years.

Adjournment of the meeting was then approved.