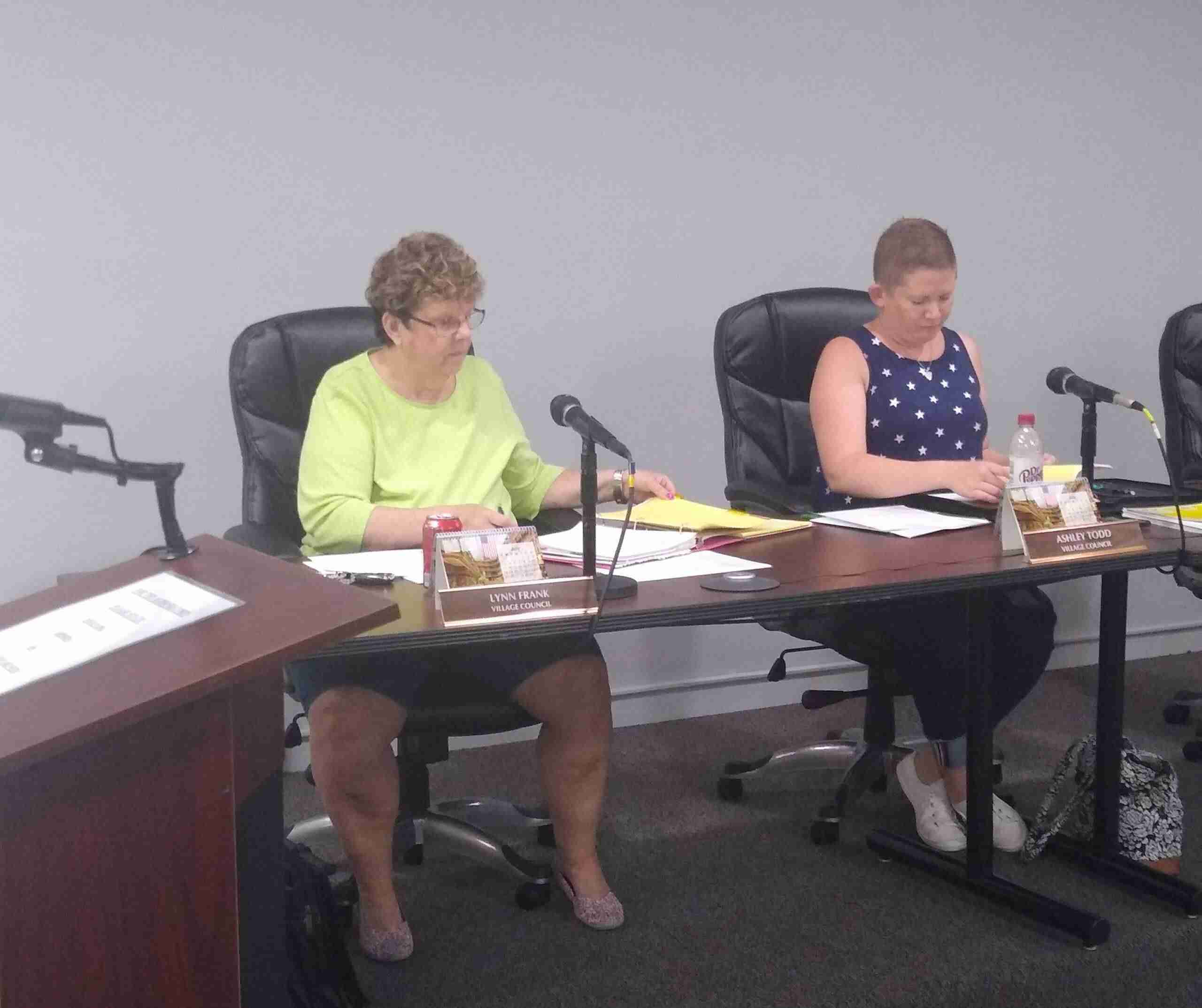 SECOND READING OF RESOLUTIONS … Council members Lynn Frank (left) and Ashley Todd (right) go through the process of approving the second reading of resolutions, including one involving the renewal of a police levy. (PHOTO BY JENNIFER ELLISON, STAFF)

July 19th‘s meeting began at 5:30 PM with all members present in attendance. Mayor Walton led the Pledge of Allegiance before everyone got down to business.

The minutes from the previous meeting were unanimously approved by the council. This time, there were no public comments heard, as well as no correspondence.

The Village Administrator Brad Peebles announced that the painting contractor was finished with the previous work and that the results were quite pleasing. The next order of business regarded the approval of recent invoices, as well as the issue of the lack of summer help to take care of the local sports fields.

This will be open for further discussion by the council at a later date. There was no input from the law or police reps.

The rules and ordinance minutes from the July 12th meeting were approved unanimously.

Resolution 21-07 Second Reading – Corrected as the third reading instead of the second. This resolution entails an ordinance authorizing the village administrator to enter into an agreement with Jones & Henry Engineers for service to design a sanitary sewer for areas along Co. Rd. H near St. Rt. 109. The resolution was approved 6-0.

Resolution 21-09 Second Reading – This one authorizes the village administrator to enter an agreement with the State of Ohio Department of Natural Resources for a cooperative fishing agreement. This is the second time the resolution has been addressed by the council and was approved 6-0.

Resolution 21-10 Second Reading – This resolution declares it necessary to renew an existing levy for the police department pursuant to Ohio revised code sections 5705.19(H) and 5705.25, requesting the auditor to certify the amount of revenue to be generated by the proposed levy renewal. This resolution was approved 6-0.

Ordinance 21-10 Second Reading – The purpose of this ordinance is to supplement ordinance 20-30 to make supplemental appropriations for the current expenses of the Village of Delta for the fiscal year ending December 31st 2021.

Resolution 21-11 First Reading – A resolution which authorizes the village administrator to enter an agreement with DGL Consulting Engineers to survey and design a downtown entrance feature on West Main St. The reason being that that little section is very difficult to maintain and upkeep, and an added structure on the plot will make it easier and safer to reach and take care of. The plans are only in the design and planning phase and no cost approximations are currently available. The project will receive further discussion at a later date once more information is ready. The resolution was approved 6-0.

Mayor Frank Walton spoke about the success of the recent Chicken Festival and thanked all of the participants and volunteers for attending.

The next meeting will take place on Monday, August 2nd at 5:30 PM. The meeting adjourned at 5:45 PM