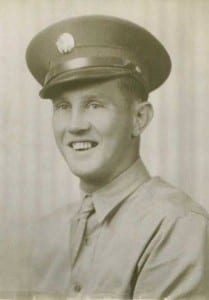 Returned Korean War P.O.W. Paul Tingle, a former resident of Montpelier and a Veteran of WWII, who stayed in the service, was deployed to Korea during the early days of the conflict, was captured/reported missing, and died while in the custody of the North Koreans, will be laid to rest at Riverside Cemetery in Montpelier on Monday, June 8, 2015.

Paul LeVon Tingle was born on August 28, 1914 in Montpelier to Roy and Estella (Finkbiner) Tingle. In January 1950 he married Ruby E. Wilkinson in San Francisco, California.

At the time of his death he was survived by his wife Ruby, his parents Roy and Stella, six brothers, Walter, Ralph, Robert, Louis “Lena”, Rodney and Richard, and two sisters Evelyn “Bee” Sims and Betty Allen. They have all since passed away. He is survived by several nieces and nephews.

A time to receive friends will be on Monday, June 8th from 9-11am at the Williams County Veterans Memorial Building in Montpelier. A memorial service will follow at 11am with Reverend Don Harris to officiate and Mr. Don Allison to speak. After the service there will be a procession from the Veterans Memorial Building to Riverside Cemetery, led by the American Legion Riders and Patriot Guard Riders. The United States Army will provide military honors at the graveside ceremony.

Following the graveside service, family and participants will are invited to the Veterans Memorial Building for a light meal.

Veterans Organizations and interested members of the public are encouraged to line the procession route from the Williams County Fairgrounds down Main Street to the St. Joseph River Bridge, at approximately 11:45am. Small flags will be provided for well-wishers by the Williams County Veterans Service Office.
Online condolences can be left for the family at www.thethompsonfuneralhome.com