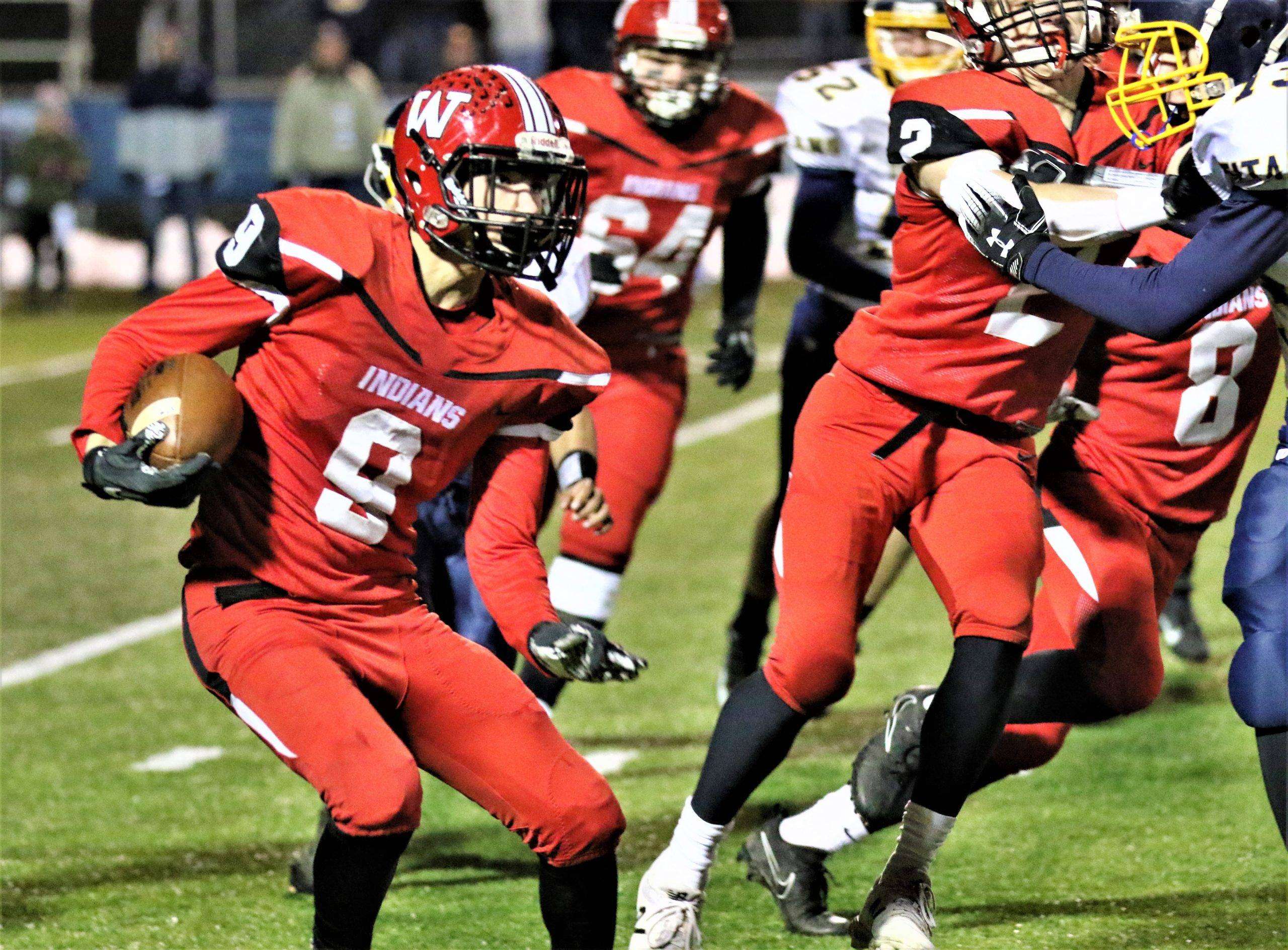 DEFIANCE-The Indians were guilty of four turnovers, two of which Ottawa-Glandorf converted into touchdowns, as they fell 21-14 to the Titans in the Division IV Region 14 Semifinal at Fred J. Brown Stadium in Defiance on Saturday night.

The Wauseon offense moved the ball well early, but their first two drives ended in turnovers as they fumbled after driving to the OG 18-yard line and then quarterback Cody Figy was intercepted by Will Kaufman near midfield on their next possession.

The second turnover led to the first score of the night by the Titans as quarterback Jacob Balbaugh went deep and connected with Jarrod Beach just three plays later for a 53-yard score to give Ottawa-Glandorf a 7-0 lead with 5:25 left in the first quarter.

Freshman Jude Armstrong then returned the ensuing kickoff to midfield, but Wauseon was unable to take advantage of the good field position and were forced to punt.

The Indians then engineered their best drive of the night after forcing a Titans punt as they went 95 yards in nine plays ending with a 23-yard scoring strike by Figy to Connar Penrod to tie the score at 7-7 with 10:31 left in the first half.

Wauseon committed their third turnover of the opening half on their next possession as Figy was hit and fumbled giving the Titans the ball back at the Wauseon 33-yard line. The Titans found the end zone four plays later on a four-yard touchdown run by Eric Heebsh to give them the lead back at 14-7 with 5:29 to go in the half.

The Titans would get one more scoring chance before halftime, but Wauseon was able to hold and the Ethan Alt field goal attempt was wide right to keep the score 14-7 at halftime.

The second half began with teams exchanging punt before the Titans went 67 yards in eleven plays, all runs, capped off by a quarterback sneak by Balbaugh on fourth and one to extend the Titans lead to 21-7 with 3:55 remaining in the third quarter.

The Indians would again drive deep into Titan territory but were stopped on downs at the OG 24 as the score remained 21-7 heading to the fourth quarter.

Following a Wauseon punt the Titans would take nearly seven minutes off the clock with a 13 play drive that ended at the Wauseon 14-yard line as the Titans gave the ball up on downs.

After an OG punt the Indians made things interesting with a 13 play 68 yard drive that ended with Figy going to Penrod on 29 yard play for a touchdown to cut the Titans lead to 21-14 with only 9.4 seconds left in the game.

Wauseon, which had to kick-off from their own 20-yard line after an unsportsmanlike conduct penalty on the extra point following the touchdown, then recovered the onside kick at their own 34-yard line to get the ball back and keep their hopes alive.

The Indians ran a hook and lateral play to get the ball to the OG 45-yard line but with no timeouts to stop the clock time would run out on Wauseon.

The Indians (9-3) held a 359-291 advantage of the Titans in total yards paced by Figy who was 25/44 for 299 yards with two touchdowns. A pair of Wauseon receivers had over 100 yards on the night as Noah Tester had seven catches for 103 yards and Penrod ended with 101 yards on seven receptions.

Northwest State To Host 2nd Annual “A Night Under The Stars”