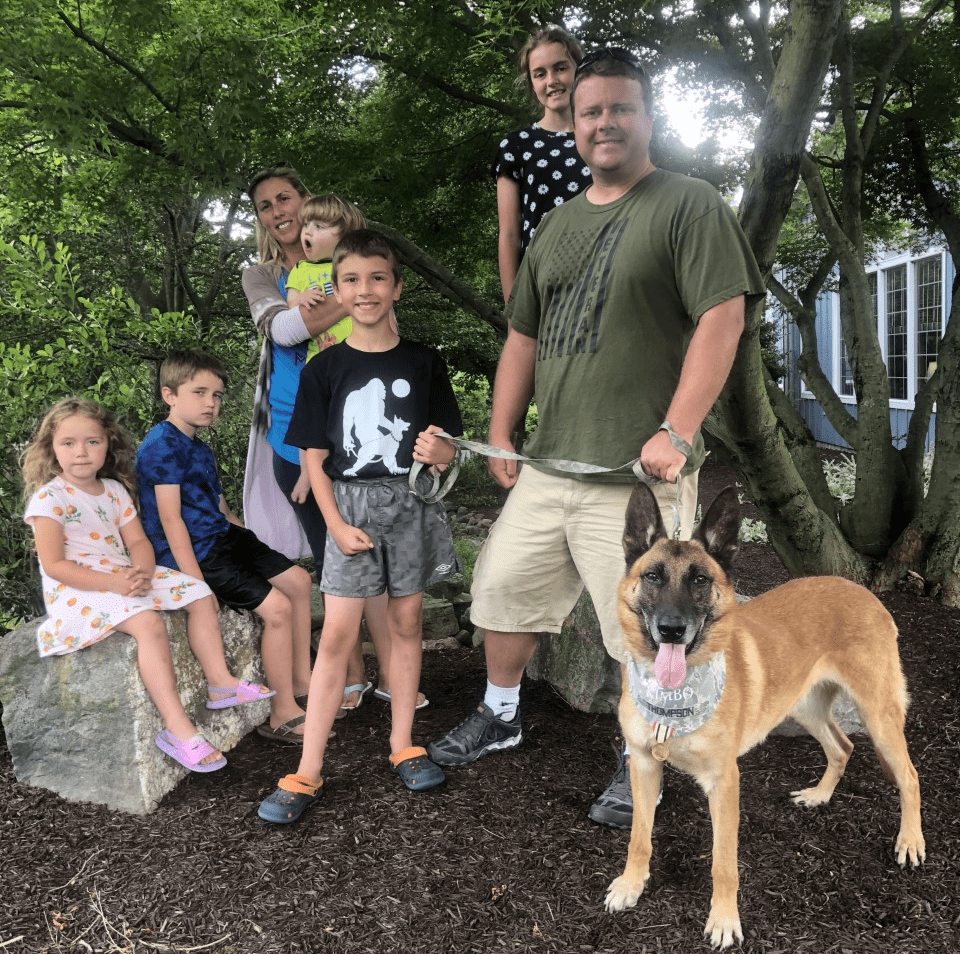 PICKING UP KIMBO … Pictured in Pennsylvania when they picked up the new addition to their family are: (Front) Erik, Dana, Kimbo. (Back) Arya, Chase, Julie, Lincoln, Savannah.

Kimbo, a dog whose job was to sniff out bombs in Iraq, is now retired and has found a new home. Kimbo, a Belgian Malinois, lives with a military family, Dana and Julie Thompson of rural Fayette, and their five small children. That includes one who is just two years old. According to Julie, that’s very unusual.

“When we first applied for a dog from K-9 Hero Haven (in Pennsylvania), we were told that it could be several months before we would hear anything,” Julie said.

“These dogs are often aggressive and don’t fit well with families with small children. Hero Haven often puts the dogs with their handler, or someone in the military, or someone in the police force.”
But something quickly changed.

“When Kimbo flew into O’Hare (Airport, from Iraq), several (in the military) said this dog is special and needed to be placed with kids,” Julie said. “We then got a call and we said, give us to the weekend and we’ll be there. When we met Kimbo, it was amazing. It was like he had been a part of us, forever.”

According to Julie, when a dog is retired, they go through a long screening process. They are neutered, which helps take away some of the aggressiveness.

The dogs go through a battery of tests, to see what type of person or persons he would best be suited for.

When Kimbo was brought out to the Thompson farm, there was one valuable test he had to pass. How would Kimbo and Domino, the Thompson’s little rescue dog, a Yorkshire and possible Schnauzer mix, respond to each other?

Well, according to Julie, Domino barked and attempted to be intimidating, but not the pair are good friends.

“Kimbo gets along well with people and other dogs, but not cats,” said Julie’s husband Dana, who is in a branch of the military. “He thinks they’re prey.”

While it’s been a bit of a process, Julie said Kimbo is learning. “Recently, he looked at one of our barn cats and I told him no,” Julie said. “And he just walked away.” Kimbo also likes to eat grass. “There wasn’t much grass in Iraq,” Dana said.

Kimbo has passed the test with all the Thompson children, too. Kimbo and nine year-old Eric and best buds, but Kimbo gets along well with all of them. Especially touching was one reaction Kimbo had to the Thompson’s one autistic child.

“We were staying in a hotel and that child stayed inside, while the rest went swimming,”Julie said. “I was sitting on the bed and looked over and Kimbo was curled up next to our child.”

In a sense, the hide and seek games give Kimbo a sense of purpose. Also, Dana explained that Kong is a very small and solid, rubberized toy. Kimbo chews on Kong a lot and Kong still has its strong shape. It’s the one toy that works, as Kimbo destroyed a couple of tennis balls in no time flat.

Remarkably, because of his time in Iraq and working with foreign handlers who speak different languages, Kimbo responds to commands in at least three languages, Dutch (from the Netherlands where Kimbo was born), English and German.

“Our vet said something to Kimbo in German and (to my surprise) he quickly laid down,” Julie said. “We sometimes give him commands in Dutch, like sit,”

Not everything has gone smoothly, though. In fact, even though the family has only had Kimbo since July, they already almost lost him.

“He is a very quiet dog, never barks and unknown to us, he had been eating a lot of laundry,” Julie said. “We took him to the vet and he had a Kansas City sweat band that had burst inside of him and had to be removed.”

“The vet recommended we put him down, but he means so much to us, we went with a second opinion. The second vet said she would try to save him and decided upon surgery. It was touch and go for a while and we thought we might lose him. Right after the surgery though, Kimbo woke up and tried to crawl off the table.”

“The vet said she had never before seen such a quick reaction to the surgery. But now, we keep him away from the laundry room and the kids have gotten much better at cleaning up, they’ve had to.”

While it has taken some time to heal at home, Kimbo is now able to play fetch once again, at almost full tilt. “The surgery cost us thousands of dollars, but it was worth it,” Dana said.