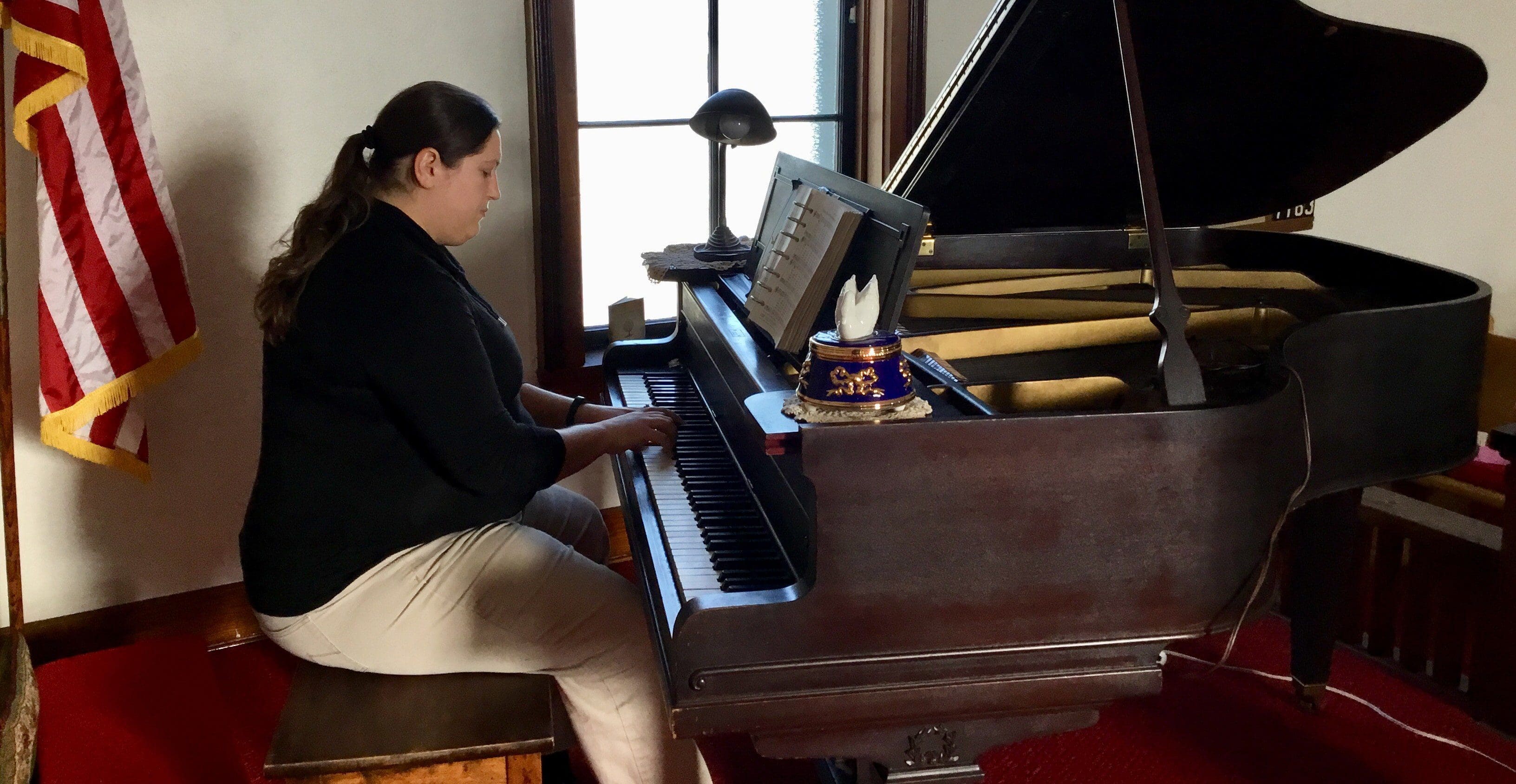 MUSICIAN’S DREAM COMES TRUE … Mrs. Nadia Taylor, who recently moved to Pioneer with her husband Christian, is thrilled to have the opportunity to start the School of Music at the Fayette Opera House. Mrs. Taylor is seen here as she played a piece of classical music on the mini grand piano at West Franklin Methodist Church where her husband is the new pastor. (PHOTO BY REBECCA MILLER, STAFF)

Fayette Fine Arts Council president Dee Ann Lawrence could not be happier to let the public know that a School of Music has been started at Fayette Opera House. The Opera House has become known in the area for having some great concerts and productions, but now they are adding an opportunity for the next generation to grow musically, hopefully in a way that they will cause them to love and promote the continuation of Fayette Opera House for many years to come.

Colleen Rufenacht, who is also on the Opera House board, shared her joy as well concerning this new project which is being called Fayette Opera House School of Music. Both Rufenacht and Lawrence have been members of West Franklin Methodist Church, near Harrison Lake, for many years, and that plays an important part in the way this story has come together.

Nadia Oselskya Taylor and her husband Christian were on there way to move to the area since he had been chosen to be the new pastor of both the Pioneer and West Franklin United Methodist Churches. “As we drove through Fayette on State Route 20,” Nadia said, “I saw the Fayette Opera House.” She continued that she was so excited because that is her specialty, singing opera. Both Nadia and Christian have degrees in music from University of Toledo, hers being a Bachelor of Music in Vocal Performance in 2017, and his a Bachelor of Arts in Music, specializing in Classical Voice, in 2018.

Nadia, who was born in Russia and was a musical prodigy as a child, said that this school of music is her brainchild because, “After we came to the United States when I was a child, we were constantly moving and I never got to be in a music school. Often we didn’t have the resources and I developed a dream of starting a music school for kids who are gifted and don’t have the resources.”

To make matters even better, when they started their work at the two churches, Christian and Nadia discovered that Lawrence and Rufenacht, who are members, could help them get plugged in right away at the Opera House. Within six weeks of her presentation of her vision to the Fayette Opera House Board, lessons began on October 14, 2019.

Presently the School of Music is offering Voice lessons and Piano lessons taught by Nadia Taylor and Guitar lessons taught by Colleen Rufenacht. As things pick up they will add other teachers as needed. It has been advertised by the use of Posters, some on FaceBook and mostly by word of mouth, and is already getting started.

The lessons cost $15 per half hour and have been kept that low so that most people can afford it. “We do hope to have scholarships soon to allow those who are gifted, but can’t cover it, to attend,” Nadia said, with Christian adding, “West Franklin Methodist Church plans on sponsoring at least two of those scholarships.”

Lessons are held on Mondays and students can choose 30 or 60 minute lessons. Voice and Piano are offered for age six and up, with Guitar being offered for age 8 and up. It is the hope of all involved that the students who take lessons there will get involved in the Opera House, extending it’s life and being a part of the community for years to come.

BUT…that is not all that the School of Music is offering! They also began, on October 6, 2019, The Ginnivan Choir which is open to anyone ages sixteen and up. No auditions are necessary and rehearsals are held on Sundays from 3:30-4:30 p.m. It is for anyone in a 15-20 mile radius of Fayette, not just for Fayette, but the “greater community” are all welcome.

At the first rehearsal there were eleven people who came, and two more who couldn’t make it that day but plan to participate. Mrs. Taylor said that a mixed style of music will be performed, beginning with Christmas Music as the choir will debut during the Christmas season.

The Choir has been named after someone whose name is intertwined with the history of the Fayette Opera House. Rufenacht and Lawrence shared that the theatre at the Opera house is called the Ginnivan/Spiess Theatre. Back in the early 1900s the Ginnivan family owned the Ginnivan Inn. Mrs. Norma Ginnivan was part of the touring dramatic company that was based in Fayette.

They were the oldest continuously running Touring Dramatic Co. in the U.S. The group stopped touring in approximately the 1940s and Mrs. Norma Ginnivan passed away in the early 50s. When the restoration of the Opera House began, due to the history of her involvement, the theater was named Ginnivan Theatre in her honor.

(Since Tom Spiess passed away, the theatre is now called the Ginnivan Spiess Theatre.) The board felt that it seemed an appropriate name for the new choir, since they will practice and perform there.

For more information, the best way to contact Nadia Taylor is through the email address ginnivanchoir.foh@gmail.com or for the music lessons, write to schoolofmusic.foh@gmail.com.